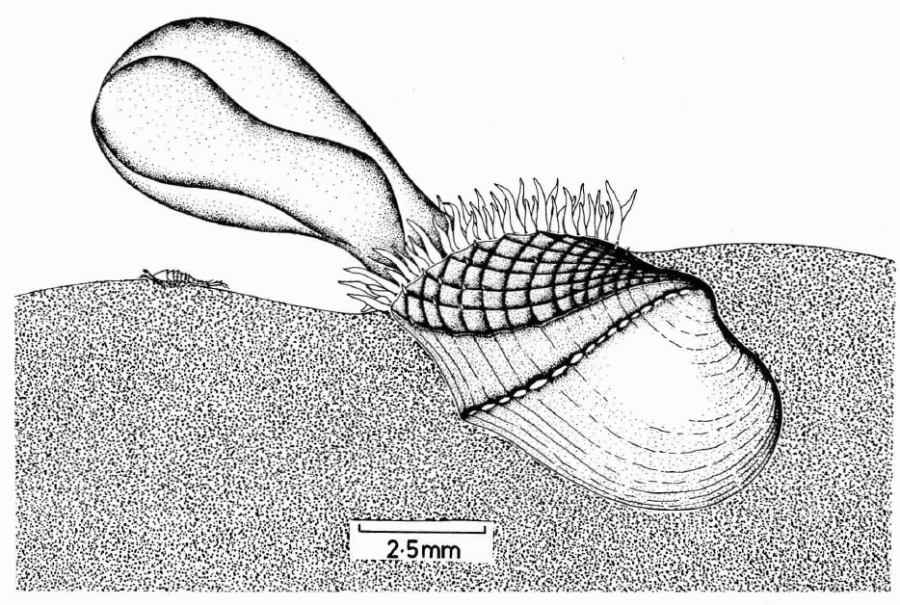 You might think of clams as rather pacifistic creatures. Most of them are; the majority of bivalves are filter-feeding organisms that suck in seawater and eat the yummy stuff being carried by the currents. This mostly means phytoplankton, tiny single-celled photosynthetic plankton which make up most of the biomass in the world’s oceans. Most bivalves could be considered exclusively herbivorous, but as I’ve learned happens throughout evolutionary biology, there are exceptions to every rule. We already talked about parasitic bivalves that have evolved to hitch a ride on other hapless marine animals. But there is an even more sinister lineage of bivalves waiting in the sediment: yes, I’m talking about killer clams.

Carnivory in bivalves has evolved multiple times, but the majority of known carnivorous bivalves fall within an order called the Anomalodesmata. Within that order, two families of clams called the Poromyidae and Cuspariidae have a surprising number of species which are known to eat multicellular prey.

Now, you can rest easy because there are no clams that eat people. You’re safe from the Class Bivalvia, as far as we know. But if you were a small crustacean like a copepod, isopod or ostracod, you would be quite concerned about the possibility of being eaten by a poromyid clam in certain regions of the world. These clams lie in wait in the sediment like a sarlacc, with sensory tentacles feeling for passing prey and a large, overdeveloped siphon ready to suck up or engulf their helpless targets.

Because they spend their lives under the sediment, these clams aren’t very well studied, and the first video of them alive was only taken in recent years. In addition, many of these killer clams live in deeper water, where their murderous lifestyle provides an advantage because food supplies can be much more sparse than in the sun-drenched shallow coastal zone. Much like the venus flytrap and carnivorous plants have arisen in response to the low nutrient supply of boggy swamp environments, the ability to eat alternative prey is valuable to the killer clams in all sorts of unconventional environments.

The siphon which these clams use to suck up their prey is a repurposed organ. In most other bivalves, the siphon is usually a snorkel-like organ which enables the clam to safely remain buried deep in the sediment and still breathe in oxgyen and food-rich water from open water above. But for the poromyids, the siphon is instead a weapon which can be used like a vaccum cleaner hose, or even be enlarged to engulf hapless prey. The poromyids have also evolved to have a much more complex, muscular stomach than any other bivalves. It takes a lot more energy to digest multicellular food, while most other bivalves simply just feed from the single-celled food they catch on their gills, expelling the other un-needed junk as “pseudofeces.”

Hopefully soon we will have video of this predatory activity in action. But until then, you can imagine that somewhere on earth, tiny copepods foraging on the surface of the sediment pass by a strange field of squishy tentacles. Suddenly, out of nowhere a hellish giant vacuum hose appears in view and sucks them in like Jonah and the whale. Then it’s just darkness and stomach acid. What a way to go!

One thought on “Killer Clams”

Apps that Darwin would have loved

Why eating clams sometimes makes us sick (Part 1 of 2)

So you want to be a postdoc overseas!

What good is a clam?