Bivalves are so named for their two hard shell valves made of carbonate, linked by a soft ligament acting as a hinge. They use a strong adductor muscle to close their shell, and the relaxation of the muscle allows the springy ligament to reopen (you might be familiar with adductor muscles as the edible tasty part of a scallop). In deference to the bivalves, laptops and flip-phones are called “clamshell” designs. That satisfying snap into place when you spring the ligamen… I mean, hinge of a flip phone is an example of human design imitating the ingenuity of evolution. But it turns out that plenty of other members of the tree of life have also stumbled upon the durable idea of a hinged two-valve shell. On the other hand, plenty of bivalves have given up on the classic clamshell look. In fact, the ancestor of all bivalves had a one-part shell, and the hinge evolved later.

Test your knowledge by trying to identify which which pictures are bivalves and which aren’t. Answers and picture sources at the bottom! 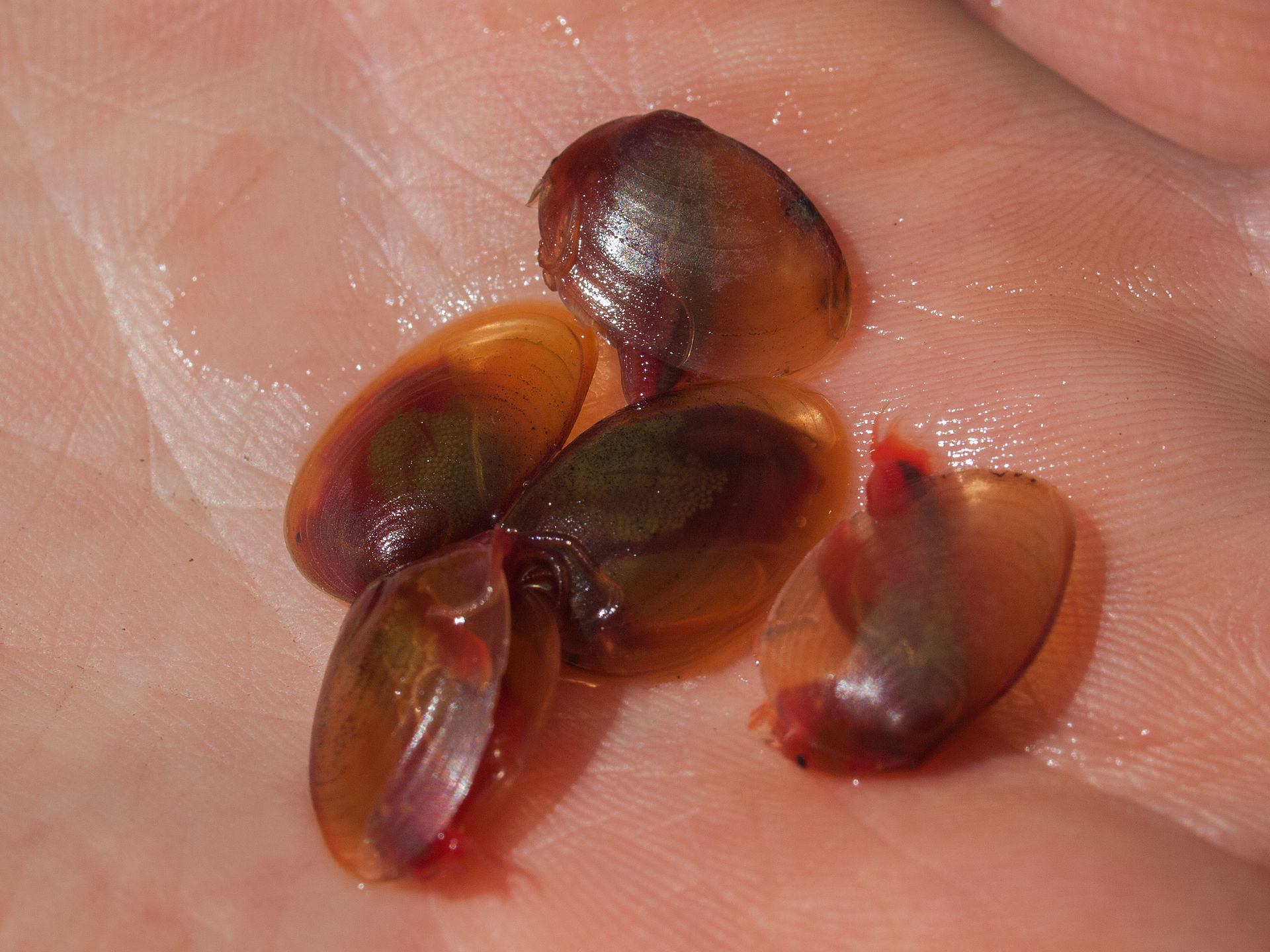 A. This is not even a mollusk, never mind a clam! It’s a different benthic (bottom-dwelling) invertebrate called a brachiopod, which make up their own phylum. To put that in perspective, brachiopods are as far from bivalves on the tree of life as you are (you’re in phylum Chordata)! Yet they evolved a similar look through a process called convergent evolution. If environmental needs are the same, organisms may come to the same solution multiple times. Much like wings for flight evolved independently in insects, birds and bats, bivalves and brachiopods both evolved a hinged shell as a form of protection from predation.

B. These are indeed bivalves: rock scallops commonly found off the coast of California (picture by me of an exhibit at Monterey Bay Aquarium). So similar to the brachiopods in their ridged, hinged shells. Like picture A, these guys specialize in living on hard, rocky nearshore bottoms. Some cultures do apparently eat brachiopods (I have not), but I have little doubt that rock scallops are tastier.

C. These are also bivalves: windowpane oysters. Also known as capiz shell, they are commonly used for decoration and art due to their beautiful, thin semi-transparent shells. A large industry harvests them off the shores of the Philippines, where they unfortunately are growing scarce due to overexploitation.

D. These are not bivalves! They are crustaceans called clam shrimp. They have little legs poking out of a hard hinged shell, and have been found in some of the harshest environments on earth, where they wait in extended hibernation, sometimes years, between bouts of rainfall.

E. Not a bivalve. These are another kind of crustacean called ostracods. Like clam shrimp, ostracods live in a hinged shell and swim around with the help of tiny legs, filter-feeding in the water column. Ostracods are everywhere in the oceans and in freshwater, but have undergone an extreme process of miniaturization from their ancestral form, and are now represent some of the smallest complex multicellular life known.

F. These are fossil ostracods. You can see why they are sometimes mistaken for bivalves! The givaway is that one valve is overhanging the other. Most bivalves have symmetry between the two halves of their shell, but ostracods and brachiopods do not.

G. This is a snail, so it’s a close molluskan cousin of bivalves. Some snails feature a hinged lid at their shell opening called an operculum. This operculum can be closed to protect from predators and also seal in water to help land snails from drying out between rains.

H. This is a bizarre bivalve called a rudist. They were common during the time of the dinosaurs but went extinct during the same extinction, 66 million years ago. While they come in many bizarre shapes, this elevator form (or as I prefer to call them, trash-can form) would have been stuck in the sediment with its small lid poking out at the surface. They could open and close the lid to filter-feed.

I. This is a giant clam, Tridacna crocea! Its shell is hidden, embedded in the coral that has grown to surround it on all sides. Only the mantle (soft “lips”) are exposed, and are brilliantly colored by the symbiotic algae in its tissue. It harvests the sugars made by the algae for food. Despite being embedded in the coral, the clam does have enough room to close and pull back its mantle if a predator approaches.

J. This is a one of the weirdest modern bivalves, called a hammer oyster. These guys are found in the tropics, and the hammerhead part of their shell is actually their hinge, extended at both sides. The hinge provides the surface area needed to “snow-shoe” on top of the soft sandy bottom where they live. Other bivalves sometimes take advantage and live on the oyster like a raft!

K. This is a different brachiopod. Notice the lack of symmetry between the valves which gives it away.

L. This is by far the weirdest modern bivalve, a shipworm. These guys live buried deep within wood and are the number-one killer of wooden ships. They secrete a long tube of carbonate and have largely given up the hinged lifestyle, looking more like worms than mollusks.